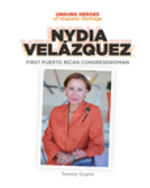 Nydia Velázquez learned about politics while sitting around her family’s dinner table each evening. Her father, who worked in Puerto Rico’s sugarcane fields, talked to his nine children about the importance of worker’s rights. He also taught them that they had a responsibility to help their community. Young Nydia took his words to heart. After earning two college degrees, she decided to put them to use helping the Puerto Rican people of New York City. She became the first Hispanic woman to hold a seat on the city council before her historic run for Congress in 1992. Her victory in that election made her the first Puerto Rican woman in the United States House of Representatives. Learn more about Nydia Velázquez, the first Puerto Rican Congresswoman in this book.