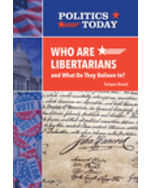 Politics Today: Who Are Libertarians and What Do They Believe In?, 1st Edition

Readers will explore the principles of the libertarian ideology, from its roots in European efforts to gain freedom from centralized government and monarchal rule, to its place in current American politics. This narrative examines what libertarians believe is the best role for government in protecting individual freedoms. What does limited government mean in the realm of economics, social issues, and the legal system? Who stands to benefit most from a libertarian system of governing and why? Readers will explore these questions and more, while learning about the trajectory of the Libertarian Party as it has gained prominence and influence in the United States, pushing the limits of the two-party system.