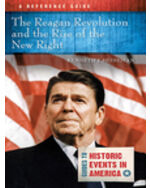 
The Reagan Revolution and the Rise of the New Right: A Reference Guide, 1st Edition

This book covers Ronald Reagan's long rise to the presidency and the conservative political revolution he brought about in the 1980s. Spurning the moderate values and policies Republicans had previously championed, Reagan's revolution continues to play an outsized role in America's political life. This important reference book gives browsers and readers alike an opportunity to focus on many of the intertwined issues of the 1980s: abortion, gay rights, law and order, the Cold War, tax cuts, de-industrialization, the Religious Right, and the political divisions that made Reagan's legislative victories possible. The books opens with a concise biography covering Reagan's rise from radio personality and actor to governor and president. Subsequent chapters cover politics and policy. Chapters also include an important review of Reagan's legendary public relations operations (morning in America; and the perfection of the television photo opp) and the ways in which 1980s popular culture influenced and was influenced by his presidency. This section portrays Reagan as a product of Hollywood who keenly understood the importance of public opinion and creating a positive image.