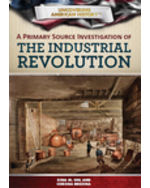 The exodus of rural dwellers for the cramped, smoke-filled, but affluent cities of the late nineteenth century took place because of an increasing number of factory jobs. And such jobs came about because of a radical shift in technology and society called the Industrial Revolution. From steam power to electrical grids, the innovations that fueled this revolution transformed the United States into a country that would later dominate the world in business, culture, and invention. Extensive focus on documents, period photographs, and artwork combined with context-setting text makes this an authoritative guide to one of the most important eras of American history.