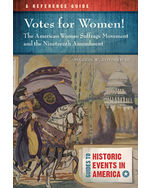 
Guides to Historic Events in America: Votes for Women! The American Woman Suffrage Movement and the Nineteenth Amendment: A Reference Guide, 1st Edition

This book provides a contextual narrative of the 70-year-long history of the woman suffrage movement in the United States, demonstrating how this important mass political and social movement coalesced into a politically skilled force despite class, racial, ethnic, religious, and regional barriers.