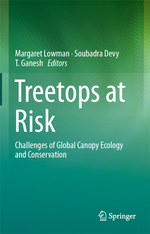 Forest canopies not only support high terrestrial biodiversity but also represent a critical interface between the atmosphere and the earth. They provide goods and services to support diverse human communities and offer opportunities to explore sustainable use of resources for many generations of local livelihoods. Forest canopies are important carbon sequestration units and serve as climate control for the planet. Canopies are important energy production centers for the planet and serve as the basis for many food chains. The canopy can also act as a hook for education outreach and conservation, inspiring ecotourism through recreation and other sustainable uses such as treetop walks, zip lines, and birding. Despite these critical services provided by forest canopies, almost no dedicated research in the treetops was initiated until the late 1970s, when single rope techniques were developed by mountaineering professionals and adapted for use in the canopy. An array of canopy access tools was designed in the 1980s and early 1990s that have opened up this "8th continent" for global exploration and discovery. This volume uses the major findings of the 5th international Canopy Conference as a platform for organization, but does not mimic the sessions and presentations of the conference. Instead, it builds on important themes that emerged from the conference and solicits articles that represent future priorities and advancements for canopy science in the next decade. Despite conservation efforts over the past 3 decades, forests are degrading at an accelerated rate, and biodiversity is increasingly threatened by human activities. This volume summarizes the issue of "treetops at risk" and assembles a global authorship to examine past accomplishments and future initiatives critical in forest conservation.

Front Cover.
Half Title Page.
Title Page.
Copyright Page.
Foreword.
Contents.
Contributors.
Frontispiece.
1: Emerging Issues.
2: The Role of Scientific Conferences to Foster Conservation Solutions for Global Forests.
3: Greening the Planet?.
4: Comparative Canopy Biology and the Structure of Ecosystems.
5: Forest Canopies as Earth's Support Systems: Priorities for Research and Conservation.
6: Emerging Threats to Tropical Forests.
7: Rethinking the Role of Tropical Forest Science in Forest Conservation and Management.
8: REDD: How Can Scientists Change the Political Jungle?.
9: Narrowing Global Species Estimates.
10: Climate Change.
11: Tropical Cyclones and Forest Dynamics Under a Changing Climate: What Are the Long-Term Implications for Tropical Forest Canopies in the Cyclone Belt?.
12: Canopies and Climate Change.
13: Church Forest Status and Carbon Sequestration in Northern Ethiopia.
14: A Novel Approach to Simulate Climate Change Impacts on Vascular Epiphytes: Case Study in Taiwan.
15: Sensitivity and Threat in High-Elevation Rainforests: Outcomes and Consequences of the IBISCA-Queensland Project.
16: A Mature Forest Canopy in a CO2-Rich Future: An Experiment at the Swiss Canopy Crane Research Site.
17: Shock Value: Are Lianas Natural Lightning Rods?.
18: Potential Impacts of Global Changes on Epiphytic Bryophytes in Subtropical Montane Moist Evergreen Broad-Leaved Forests, SW China.
19: “Canopy-Less” Monitoring of Biodiversity and Climate Change: Signs of a Leaky Roof.
20: New Approaches.
21: Mesoscale Exploration and Conservation of Tropical Canopies in a Changing Climate.
22: Why Do Sloths Poop on the Ground?.
23: Birds of the “Canopy”: Historical Perspective, Current Trends, and Future Directions.
24: Functional Roles of Lianas for Forest Canopy Animals.
25: Islands in a Sea of Foliage: Mistletoes as Discrete Components of Forest Canopies.
26: Nonvascular Epiphytes: Functions and Risks at the Tree Canopy.
27: Canopy Texture Analysis for Large-Scale Assessments of Tropical Forest Stand Structure and Biomass.
28: Changing Tropical Forest Dynamics and Their Effects on Canopy Geometry and Tropical Forest Biodiversity.
29: Reproductive Biology and Population Genetics of Some Canopy- and Understorey-Dominant Tree Species of Sri Lanka: Implications for Conservation Management in a Fragmented Landscape.
30: The Importance of Flowers for Beetle Biodiversity and Abundance.
31: Assessing Canopy Processes at Large Landscape Scales in the Western Ghats Using Remote Sensing.
32: Ontogeny of Herbivory on Leaves in a Tropical Rain Forest in Madagascar.
33: Do Water Bears Climb Trees Too?.
34: From Leaf Litter to Canopy: Noninvasive and Reliable Sampling in a Tropical Rainforest.
35: Education and Outreach.
36: Win-Win for Scientists and Citizen Scientists Who Engage in Amazon Canopy Expeditions.
37: In the Canopy with Wheelchairs: A Model for Teaching Field Biology.
38: Modeling Insect Outbreaks in Forest Canopies: Integration of Virtual Simulations with Hands-On Ecology for Undergraduates.
39: Canopy Capture: Essay of a Photographer.
40: Kids Can Save Forests.
41: Forest Canopy Tourism: Analyzing a Flagship Attraction in the Ecotourism Arena from a Political Ecology Perspective.
42: Ecosystem, Services and Sustainability.
43: Ancient Coastal Rainforest Canopies in Western Canada: Issues in Biodiversity and Conservation.
44: The Population Dynamics of Epiphytic Orchids: A Review and Methodological Guide.
45: Can Canopy-Dwelling Frogs Be Monitored from the Ground? A Case from Western Ghats of India.
46: Just Harvest: Ecology and Politics of Forest Canopy Product Use in Protected Areas.
47: Tropical Rainforests of Africa: Can Conservation Projects Reconcile Forest Conservation and Development of Forest-Dependent Communities?.
48: Sacred Groves as Sanctuaries for Mistletoe Conservation in Kathmandu Valley.
49: Nutrient Recycling Starts in the Canopy: The Secretive Action of Termites.
50: Valuing Ecosystem Services Flowing from the Indian Himalayan States for Incorporation into National Accounting.
51: Epiphytic Plants as NTFPs from the Forest Canopies: Priorities for Management and Conservation.