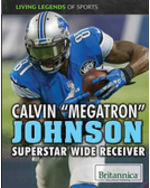 Calvin "Megatron" Johnson, star wide receiver for nine seasons with the Detroit Lions of the National Football League, was given his nickname during his rookie year because of his large size and amazing speed. Johnson's speed and acrobatic catches made him a standout player. In 2012, he broke wideout Jerry Rice's long-standing record of 1,848 receiving yards in a season by hitting an astounding 1,964 yards. In simple language, this book describes Johnson's skills and dedication to the game as well as his off-field work. In full-color photographs, readers observe some of Johnson's dazzling plays throughout his remarkable career.

Front Cover.
Title Page.
Copyright Page.
Contents.
Introduction.
1: A Head Above Right from the Beginning.
2: Lion Cub.
3: Pride of the Lions.
4: Off the Field.
Timeline.
Other Living Legends of Football.
Glossary.
For More Information.
Index.