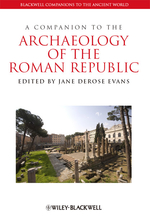 A Companion to the Archaeology of the Roman Republic, 1st Edition

The role of archaeology has expanded over the past 30 years, and research now frequently overlaps with the work of ancient historians and classicists. A Companion to the Archaeology of the Roman Republic demonstrates how archaeological methods have been used to study the era of the Roman Republic, and the influences of non-Roman cultures on its formation. A collection of original essays by both emerging and established archaeologists with a wide range of nationalities and areas of interest, A Companion to the Archaeology of the Roman Republic reveals how differing approaches and methodologies contribute to an understanding of the Republic across the Mediterranean basin. Of interest both to archaeologists themselves, and to students of ancient history, art history and classics, it offers a diverse approach to a fascinating field.