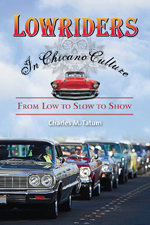 Lowriders In Chicano Culture: From Low To Slow To Show, 1st Edition