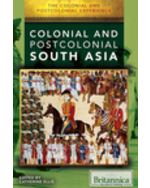 While the British became the dominant colonial power in South Asia, the Dutch, Portuguese, and French also initially vied for control of the region. This volume traces the rise of European influence in South Asia with an in-depth discussion of the path to colonialism and various facets of colonial rule. It contains a history of resistance to colonial rule, discusses how the people of South Asia won their independence, and how explains how the region evolved after independence, including the partition of India and Bangladesh's separation from Pakistan. Readers will come away with an understanding of how colonialism shaped South Asia today.