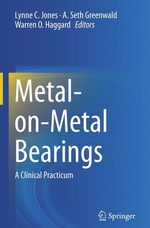 This book addresses the background and significance of the factors potentially influencing the clinical and biological outcomes of metal-on-metal hip implants. Metal-on-metal bearings were introduced and evaluated as an alternative to other bearing couples, particularly metal-on-polyethylene, due to their enhanced wear resistance as determined in laboratory testing. Initially, reports of short-term clinical outcomes were favorable and an increasing number of metal-on-metal prostheses were implanted. Subsequently, isolated case findings describing adverse tissue responses around the articulation became the harbinger of an increasing number of reports describing pseudotumors and other significant lymphocytic-based responses associated with metal-on-metal prostheses. Questions have been raised as to whether this is an implant, design, or patient-specific response. The reasons why some patients have a negative biological response and pathology while others do not remain to be determined, but tens of thousands of patients in the US, the UK, and around the world are considered to be at risk. Leading researchers and clinicians describe the issues related to the nature of the biological and pathological responses and the protocols that should be followed to determine if an adverse response is occurring. This book is essential reading for researchers, engineers, and orthopaedic surgeons who are involved in the design, evaluation, and implantation of metal-on-metal prostheses.