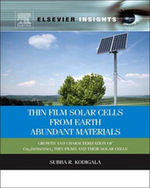 This book explains how to make thin film solar cells at low cost from abundant solar energy materials. Proper and optimized growth conditions are essential while sandwiching thin films, otherwise secondary phases play a role in undermining the function of solar cells. The book illustrates growth and characterization of Cu2ZnSn(S1-xSex)4 thin film absorbers and their solar cells. The fabrication process of absorber layers by either vacuum or non-vacuum process is elaborated. Characterization analyses, such as XPS, XRD, SEM, and AFM, make it possible to tailor the physical properties of the absorber layers. The role of secondary phases, such as ZnS, Cu2-xS, and SnS, which are determined by XPS, XRD or Raman in the absorber layers is discussed. Optical spectroscopy analysis is also discussed. The electrical properties of the absorbers show the influence of substrates, growth temperature, impurities, and secondary phases. Low temperature I-V and C-V measurements of Cu2ZnSn(S1-xSex)4 thin film solar cells are clearly described. Parameters such as efficiency, fill factor, series resistance, and parallel resistance are discussed. Band structure, which helps to adjust interface states at the p-n junction of the solar cells is discussed as is the role of window layers. The simulation of theoretical efficiency of Cu2ZnSn(S1-xSex)4 thin film solar cells explains how much efficiency can be experimentally extracted from the cells.