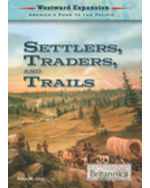 Since the establishment of the American colonies, the frontier expanded westward steadily until the country bordered both the Atlantic and Pacific oceans. Soldiers, explorers, missionaries, and fur traders were the first Europeans to penetrate the country's interior. Soon, gold miners, dirt farmers, and cattle ranchers followed, blazing dangerous trails across barren lands and snow-topped mountain ranges. American Indians were too few to stop the relentless tide of pioneers, despite their efforts. Readers discover the personalities, routes, and circumstances that propelled Americans to claim the mysterious 'Great American Desert' west of the Mississippi River.