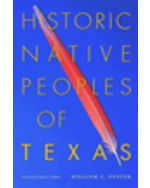 Foster describes the historic Native peoples of Texas by geographic regions. His chronological narrative records the interactions of Native groups with European explorers and with Native trading partners across a wide network that extended into Louisiana, the Great Plains, New Mexico, and northern Mexico. Foster provides extensive ethnohistorical information about Texas's Native peoples, as well as data on the various regions' animals, plants, and climate. Accompanying each regional account is an annotated list of named Indian tribes in that region and maps that show tribal territories and European expedition routes. This authoritative overview of Texas's historic Native peoples reveals that these groups were far more cosmopolitan than previously known. Functioning as the central link in the continent-wide circulation of trade goods and cultural elements such as religion, architecture, and lithic technology, Texas's historic Native peoples played a crucial role in connecting the Native peoples of North America from the Pacific Coast to the Southeast woodlands.