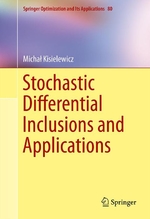 ​This book aims to further develop the theory of stochastic functional inclusions and their applications for describing the solutions of the initial and boundary value problems for partial differential inclusions. The self-contained volume is designed to  introduce the reader in a systematic fashion, to new methods of the stochastic optimal control theory from the very beginning. The exposition contains detailed proofs and uses new and original methods to characterize the properties of stochastic functional inclusions that, up to the present time, have only been published recently by the author. The work is divided into seven chapters, with the first two acting as an introduction, containing selected material dealing with point- and set-valued stochastic processes, and the final two devoted to applications and optimal control problems. The book presents recent and pressing issues in stochastic processes, control, differential games, optimization and their application in finance, manufacturing, queueing networks, and climate control. Written by an award-winning author in the field of stochastic differential inclusions and their application to control theory, This book is intended for students and researchers in mathematics and applications; particularly those studying optimal control theory. It is also highly relevant for students of economics and engineering. The book can also be used as a reference on stochastic differential inclusions. Knowledge of select topics in analysis and probability theory are required.