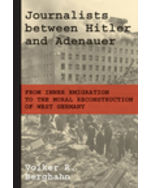 Journalists Between Hitler and Adenauer: From Inner Emigration to the Moral Reconstruction of West Germany, 1st Edition

This book takes an in-depth look at the moral and political role of German journalists before, during, and after the Nazi dictatorship, from the late Weimar period through the postwar decades. Illuminating the roles played by journalists in the media metropolis of Hamburg, it focuses on the lives and work of three remarkable individuals: Marion Countess Dönhoff, Paul Sethe, and Hans Zehrer. Born before 1914, all witnessed the Weimar Republic’s end and opposed Hitler. When Hitler seized power in 1933, they were, like their fellow Germans, confronted with the difficult choice of entering exile, becoming part of the active resistance, or joining the Nazi Party. Instead, they followed a fourth path—inner emigration—psychologically distancing themselves from the regime, their writing falling into a gray zone between grudging collaboration and active resistance. The book sheds light on the influence of German media in the mid-20th century and raises questions about modern journalism.

Front Cover.
Half Title Page.
Title Page.
Copyright Page.
Contents.
Journalists Between Hitler and Adenauer.
Introduction: Journalists and Freedom of Expression in the Twentieth Century.
1: Paul Sethe: Resistance and Its Post-Hitler Moral and Journalistic Consequences.
2: The Intellectual Journey of Marion Countess Dönhoff.
3: Hans Zehrer's Intellectual Journey from Weimar Berlin to Postwar Hamburg: Struggling with Past and Present, 1923–1966.
4: Hanseatic Journalism and Its Networks.
Conclusion: Freedom of Expression in the Twentieth and Early Twenty-First Centuries.
Acknowledgments.
Notes.
Select Bibliography.
Index.
A Note on the Type.