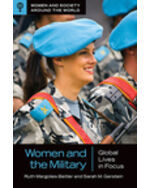 
Women and the Military: Global Lives in Focus, 1st Edition

Around the world, millions of men serve in their countries' militaries, be it on land, on the seas, or in the air. But while many militaries have opened all positions to women, even those on the front lines, others remain closed. Countries have cited a number of reasons for their policies, changing views of women and the military, conscription, economic, and demographic trends. Written by a professor of comparative politics at the United States Military Academy at West Point and an active-duty army major, this book seeks to provide an understanding of women's roles in militaries around the world. The book is organized by region, exploring societal and cultural views of masculinity and war, as well as factors influencing changing views of women and the military, including conscription, economic, and demographic trends. Topics also include sexual harassment, recruitment, and views on women's physicality and strength. High school students, undergraduates, and general readers will find this cross-cultural study a fascinating and important resource.