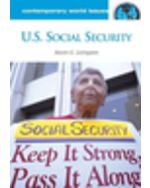 The 70-year-old Social Security program has been widely successful -- so much so that the average American is now supported by Social Security for 20 years. But that widespread success also has a dark side: It means that program failure would be devastating. Social Security faces grave funding problems and significant changes are likely. Are we ready for some hard choices?

This timely volume details the history and development of the American system of Social Security and examines the serious problems it faces. It covers the "prehistory" of Social Security dating back to the 19th century and projects the program's likely future over the next several generations.

Thematically, the book chronicles the origination of the initial Social Security Act of 1935, each major reform to the act through today, the nature and magnitude of the current difficulty facing Social Security, and each major remedy that has been proposed. It also examines programs in other nations and how they have attempted to address similar problems. This handbook is essential reading for anyone trying to understand how this vital program evolved and where it could be going.