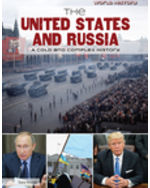 After the U.S.S.R. formed, the United States found itself in a rivalry that has persisted for nearly a century. Readers are introduced to the complex history between the United States and Russia, which, for many years, was a conflict between democracy and communism. However, after the dissolution of the U.S.S.R., the relationship between the two countries remains strained, and readers also explore the reasons for this continued tension. Quotes from powerful leaders of both countries, striking photographs, and thoroughly researched text help readers understand why these two competing nations have maintained a cold relationship for so many years.