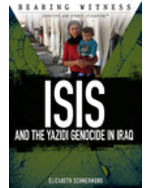 In 2014, many people saw images of members of the Yazidi ethno-religious group on television. They sought refuge from Islamic State in Syria (ISIS) militants in the mountains of northern Iraq. Since then, the genocide against the Yazidi minority group has continued. This book will teach students about Iraq and the Yazidis, as well as the violence the Yazidis have faced at the hands of ISIS. As the war against ISIS and the global refugee crisis continue, understanding the plight of the Yazidis in order to work against hatred and discrimination is more important than ever.