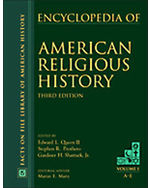 This timely, three-volume reference guide reflects the significant issues and the current state of American religious history. In more than 800 thoughtful, informative entries - 100 of which have been added or revised for this edition - Encyclopedia of American Religious History, Third Edition outlines the numerous philosophers, personalities, social issues, and cultural histories of religious practices throughout American history. Special emphasis is placed on recent developments in religious life in this country and the historical contributions of people long neglected by mainstream religious historians, including African Americans, Native Americans, and women. In addition, an expanded introduction gives students a narrative historical overview of religion in America.