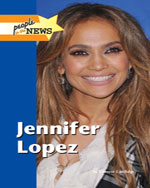 This book details the life of superstar Jennifer Lopez. Lopez was the first Latin actress to be paid $1 million for a motion picture, and she went on to become the highest-paid Latin actress in Hollywood history as well as one of the highest-paid actresses of any ethnicity. In 2012 Lopez received a star on the Hollywood Walk of Fame, often regarded as one of the highest honors an entertainer can receive. Readers will learn about Lopez's childhood in the Bronx, her evolution from talented dancer turned movie actress, then singer, and now American Idol judge.