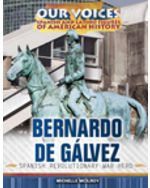 The American Revolution was one piece of a global struggle for power. Great Britain, France, Spain, and the colonists under each empire's rule fought for control of the world's vast lands and resources. On the American battlefront, Bernardo de Galvez, a Spanish general, would survive battle wounds and hurricanes to lead a diverse force to victory. His leadership changed the course of history, and contributed to the American patriot's success. In this enlightening and engrossing book, students will think critically about the global nature of the era as they study a new perspective and powerful leader from the American Revolution.