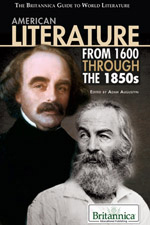 The Britannica Guide to World Literature: American Literature from 1600 Through the 1850s, 1st Edition

Fiercely nationalistic, the first prominent American writers exhibited a profound pride in the territory that would come to be known as the United States. Predating even the Declaration of Independence, much early American writing entailed commentary on the newly developing American society. This volume examines the literature of the country in its nascence and writers such as Poe, Hawthorne, and Emerson, who helped cultivate a uniquely American voice.