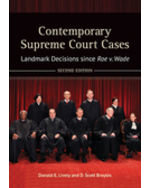 With its blend of accessible writing and actual excerpts from Court opinions, this book serves to explain the legal and cultural underpinnings of landmark U.S. Supreme Court decisions of the past 35 years—and to illuminate how these decisions have shaped the trajectory and character of modern American society.