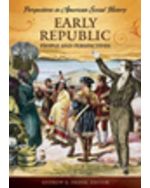 In a compilation of essays, Early Republic: People and Perspectives explores the varied experiences of many different groups of Americans across racial, gender, religious, and regional lines in the early years of the country.

The American Revolution sparked popular uprisings in France, Ireland, Poland, and elsewhere around the world. Yet only the United States was able to follow the successful overthrow of a colonial oppressor with a stable, lasting republic. Credit for that usually falls to the extraordinary leaders of the time, but what about the contributions of ordinary citizens? How did they affect the country in its formative decades?

In a series of chapters, Early Republic provides vivid portraits of the farmers, entrepreneurs, laborers, women, Native Americans, and slaves who made up the population of the United States in its infancy. Key events, such as the two-party political system, the Louisiana Purchase, the War of 1812, and the expansion into the Ohio Valley, are seen through the eyes of the ordinary citizens who helped make them happen, in turn, making the United States what it is today.