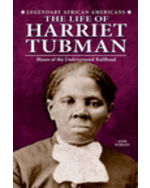 The Life of Harriet Tubman: Moses of the Underground Railroad, 1st Edition

Sorting myth from truth in this amazing tale of courage and heroism, Anne Schraff breathes new life into the story of the most famous conductor on the Underground Railroad. Harriet Tubman ran away from slavery in 1849, walking one hundred miles to freedom in the North. For the next sixteen years, Tubman risked her newfound freedom—and her life—to help about three hundred other slaves escape. During the Civil War, Tubman worked as a nurse and a scout for the Union army, and in her later years, she joined the struggle for the education of her people and for women's rights. This book is developed from Harriet Tubman: Moses of the Underground Railroad to allow republication of the original text into ebook, paperback, and trade editions.

Front Cover.
Title Page.
Copyright Page.
Contents.
Frontispiece.
1: The Next Time Moses Comes.
2: Like a Weed.
3: Liberty or Death.
4: The Conductor.
5: Let My People Go.
6: You Will Be Free or Die.
7: The Last Days of the Railroad.
8: Scout, Spy, Nurse, Soldier.
9: A New Beginning.
10: I Can Hear the Angels Singing.
Chronology.
Chapter Notes.
Further Reading.
Index.