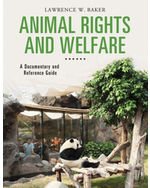 Animal Rights and Welfare: A Documentary and Reference Guide addresses a broad range of key topics within the subject of animal rights and welfare, including zoos, animal testing, philosophy regarding the treatment of animals, and practical measures instituted to protect animals, supplying readers with an impartial and authoritative resource for understanding the history of animal rights and the issues that dominate discussions about animal rights. Organized chronologically, the book discusses topics such as animal rights within the context of hunting for food, pelts, and other body parts, as well as for recreation; working animals; animals used for education or scientific and medical research; animals in the fashion and entertainment industries; and the food industry. The text provides reproductions of dozens of carefully selected primary documents from the time of Aristotle (B.C.) to present day to engage readers and provide opportunities for them to apply their critical thinking and analysis skills. The text of each document is introduced by a headnote to place it in context and concludes with analysis that details its significance and clarifies specific passages when needed. Each document or excerpt is followed by a full citation of the document.

Front Cover.
Half Title Page.
Recent Titles in Documentary and Reference Guides.
Title Page.
Copyright Page.
Contents.
Reader’s Guide to Related Documents.
Preface.
1: A Debate Waged over the Centuries.
2: “Animals are Created for the Sake of Men”.
3: “[Animals] are Destitute of Reason”.
4: “Be Tender to All Sensible Creatures”.
5: “What a Pitiful, What a Sorry Thing to Have Said that Animals are Machines Bereft of Understanding and Feeling….”.
6: “… [N]either More nor Less than God Made Them, There is no More Demerit in a Beast Being a Beast, than There is Merit in a Man Being a Man”.
7: “The Question is Not, Can They Reason? Nor, Can They Talk? But, Can They Suffer?”.
8: “Education, Habit, Prejudice, Fashion, and Interest, have Blinded the Eyes of Men, and Seared Their Hearts”.
9: Animal Welfare and the New Conservation Ethic.
10: “It is Expedient to Prevent the Cruel and Improper Treatment of Horses, Mares, Geldings, Mules, Asses, Cows, Heifers, Steers, Oxen, Sheep, and Other Cattle”.
11: “How do You Prove that Mankind is Invested with the Right of Killing Them, and that Brutes have been Created for the Purpose You Assert them to be?”.
12: “The Destruction of Animals for Food … Involves so Much of Cruelty as to Cause Every Reflecting Individual—not Destitute of the Ordinary Sensibilities of our Nature—to Shudder”.
13: “To Prevent Cruelty to Animals while in Transit”.
14: “No Person shall Kill Any Otter, Mink, Marten, Sable, or Fur Seal, or Other Fur-bearing Animal within the Limits of Alaska Territory”.
15: “When I told him that Eating Flesh is not Necessary, but is Only a Luxury, He Agreed”.
16: “This Animalizing of the Human Body, instead of Ensouling and Spiritualizing It … Keep[s] the Plane of Humanity Lower by This Constant Degradation of the Animal Self”.
17: “Animals have Also the Right to Be Treated with Gentleness and Consideration”.
18: “To Aid in the Restoration of Such Birds … [That] have Become Scarce or Extinct”.
19: “Vegetarianism is a Commendable Departure from the Established Barbarous Habit”.
20: “I, Theodore Roosevelt, … Do Hereby Make Known and Proclaim that the Wichita Forest Reserve … Is Designated and Set Aside for the Protection of Game Animals and Birds”.
21: “[The Hogs] were so Very Human in their Protests—and so Perfectly within their Rights!”.
22: “Ethics … without Limits Towards All that Lives”.
23: “We shall Protect Hundreds of All Kinds of Wildlife which might Otherwise Soon Be Extinct”.
24: Regulating Animal Rights and Welfare in an Industrialized Economy.
25: “Slaughtering of Livestock …Shall be Carried Out Only by Humane Methods”.
26: “Whoever Uses an Aircraft or a Motor Vehicle to Hunt …any Wild Unbranded Horse, Mare, Colt, or Burro …shall Be Fined Not More than $500, or Imprisoned Not More than Six Months”.
27: “To End the Business of Stealing Dogs and Cats for Sale to Research Facilities”.
28: “Nothing is More Priceless and More Worthy of Preservation than the Rich Array of Animal Life with which our Country has Been Blessed”.
29: “Consider that Procedures that Cause Pain or Distress in Human Beings may Cause Pain or Distress in Other Animals”.
30: “Pain and Distress Must Be Minimized in Experimental Procedures”.
31: “Why Worry about Their Loneliness, Their Pain, Their Death?”.
32: “It’s not the Killing of the Animals that is the Chief Issue Here, but Rather the Unspeakable Quality of the Lives They are Forced to Live”.
33: “When an Injustice is Absolute, One Must Oppose It Absolutely”.
34: “Dolphins … are Frequently Killed in the Course of Tuna Fishing Operations”.
35: “Place … The Protection Of … Human Rights Somewhat above or at Least on an Equal Footing with Wolves, Bears, [and] Salmon”.
36: “How do We Determine the Cost of Removing One Note from a Mozart Symphony?”.
37: “To Eliminate the Wasteful and Unsportsmanlike Practice of Shark Finning”.
38: “Exotic Cats in Captivity should Be Able to Live Humanely and Healthfully”.
39: Animal Rights Campaigns Elicit Praise and Condemnation.
40: “Peta’s Efforts Have Crossed the Line of Free Speech and First Amendment Protection”.
41: “Peta has a Campaign to Reform Truly Heinous Forms of Cruelty Supported by KFC”.
42: “The Animal Liberation Front and the Earth Liberation Front Have Become the Most Active Criminal Extremist Elements in the United States”.
43: “The Animal Liberation Movement is a Loosely-associated Collection of Cells of People who Intentionally Violate the Law in Order to Free Animals from Captivity and the Horrors of Exploitation”.
44: “Zoos … Must Continually Make Adjustments to Have a Meaningful Role in Modern Society”.
45: “[T]hey Appeared at Homes with a Truck that had a Video Monitor on It Displaying Images of Animals in Cages, and They Shouted with Bullhorns Obscenities and Defamatory Statements”.
46: “This Legislation will … Force Americans to Decide if Speaking up for Animals is Worth the Risk of Being Labeled a ‘terrorist’ ”.
47: “In This Spectacle, Dogs and Roosters are Often Drugged to Make Them Hyper-aggressive and Forced to Keep Fighting Even after Suffering Severe Injuries”.
48: “Animal Research has Played a Vital Role in Virtually Every Medical Advance of the Last Century for both Human and Animal Health”.
49: “Production Agriculture has Not and will Never Be Given the Credit It is Due by Animal Rights Activists and that We Too Care about the Welfare of our Animals”.
50: “If our Food is so Safe, why are We so Unhealthy?”.
51: “The Two Components of Scientific Ideology … Created a Formidable Barrier to the Awareness of the Ethical Issues Inherent in Animal Research”.
52: “Peace, Phillips, and Vick Executed Approximately 8 Dogs that did Not Perform Well in ‘testing’ Sessions”.
53: “Food Animals that are Treated Well and Provided with at Least Minimum Accommodation of Their Natural Behaviors and Physical Needs are Healthier and Safer for Human Consumption”.
54: Animal Welfare from Seaworld to a World of Rising Seas.
55: “The Ethics of Riding Atop a Wild Animal in a Spandex Suit with Loud Music Blaring Cannot Be Reconciled under the Banner of Education or Conservation”.
56: “Firsthand Experience with Animals is the Best Way to Create a Lasting Appreciation and Respect for Animals”.
57: “This Law Protects both Animals and Free Speech by