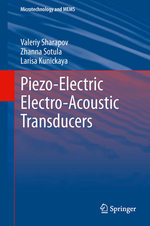 Electroacoustic transducers (EAT) are devices, which transform electric energy to energy of acoustic fluctuations. Principles of action, design of transducers for work in air and water as well as for non-destructive control are described in the book. New technologies of designing EAT, not only expanding designing possibilities, are described. They also allow to create transducers with improved characteristics. In particular, methods to increase target capacity (sound pressure), decrease working (resonant) frequency of transducers and expand frequencies of projectors and sound receivers are developed. Methods and control units of transducers in batch production of transducers are described, too.