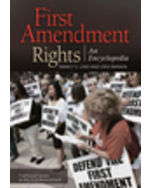 This two-volume work addresses every key, cutting-edge issue regarding the First Amendment, including subjects such as freedom of religion, freedom of press, freedom of speech, and freedom of organization.