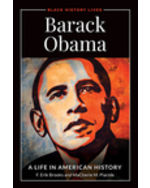 Barack Obama stated, Our destiny is not written for us. It is written by us. Was he talking about himself and his rise to the American presidency? Can Obama's monumental political achievements be attributed simply to his writing his own destiny? On January 20, 2009, Barack Obama was inaugurated as the first African American U.S. president. His politics of unity appealed to many segments of American society. When Obama became president, the U.S. faced challenges at home and abroad - the country was stalled in two wars in Afghanistan and Iraq while facing a financial and banking crisis, and poverty was on the rise. Undaunted, former President Obama noted, We did not come to fear the future. We came to shape it. This book discusses the life of Barack Obama chronologically and discusses his post-presidential life. For readers of all levels interested in Barack Obama, politics, political parties, political ideology, presidential elections, government, and the U.S. presidency.