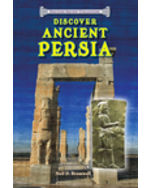 A history of ancient Persia discussing the contributions of rulers from Cyrus to Darius as they expanded the boundaries of the empire. Over a period of almost 1,200 years, the ancient Persians learned to cultivate crops such as wheat and barley and to domesticate animals. They also demonstrated their talents for architecture and art by building enormous palaces, such as at the site of Persepolis, and introduced the idea of worshipping a single god.