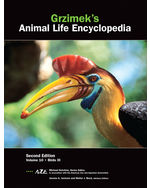 Gale proudly presents the first completely revised and updated version of this acclaimed set in 30 years. Some reviewers call Grzimek's Animal Life Encyclopedia the best reference work on animals ever published. Others call it the legacy left to us by famed zoologist and animal lover, Bernhard Grzimek. The accolades and praise go on for the newest addition to Gale's line of reference titles. The original 13-vol. set, published in Germany in the late 1960s, is internationally renowned for its scientific reporting, coverage and illustrations, and serves as a major point of reference for researchers and students studying the animal kingdom. Thorough articles familiarize readers with animals found everywhere on the globe, detailing their life cycles, predators, food systems, overall ecology and much more. Staying true to the original scientific pedigree, Gale enlisted prominent advisors and contributors from the international scientific community to incorporate recent developments in the animal world. Our new editions of Grzimek's Animal Life Encyclopedia are sure to serve the needs of students at every academic level.

"H. C. Bernhard Grzimek hoped his original encyclopedia would disseminate knowledge of the animals and love for them. This is also a goal of the revised edition; it does not disappoint. Authoritative writing in a style accessible to the general reader, comprehensive coverage, a taxonomic arrangement to facilitate comparison between species, consistent organization, ample color illustrations and photographs, incorporation of current research, and the inclusion of conservation status and the significance of the animal to humans make Grzimek's an excellent choice for academic, large public, and special libraries."--Booklist (April 2004)

"Originally published in German in 1967 and translated into English in the 1970s, Grzimek's earned a reputation as the most comprehensive and authoritative information source on animals. Now this acclaimed encyclopedia is being completely revised to incorporate more than 30 years of scientific knowledge and discovery... Retaining the character of the first edition, the editors focused on updating the information and revising the text, but the most significant change is a vastly improved structure. Well-organized sections replace the long, endless narratives characteristic of the first edition, thus making the revised edition much easier to use, especially for the nonbiologist... Over 5,000 color illustrations and 3,500 maps were created specifically for this edition. Approximately 3,500 new color photographs are included as well... Even after 30 years, the original Grzimek's is still considered a core title for reference collections. Biologists and nonbiologists alike will appreciate the excellent organization, well-written text, and beautiful illustrations. Gale will also publish e-books of the volumes, available through netLibrary, as the printed editions come out. Judging from the volumes released thus far, users will not be disappointed with this new edition. Highly recommended for all types of libraries." -- Library Journal (February 2003)

"... Over 5,000 color illustrations and 3,500 maps were created specifically for this edition. Approximately 3,500 new color photographs are included as well... Even after 30 years, the original Grzimek's is still considered a core title for reference collections." -- Library Journal (February 2003)

"The second edition of Grzimek's, essential in reference for more than 30 years, builds on the work's high quality. Expanded from 13 to 17 volumes, it includes recent knowledge and is repackaged with new photographs, drawings, and layout. The original work used narrative style, but the second edition divides chapters into specific topic areas, still enjoyable to read but easier to find...Besides the introductory material, the strength of the work and the bulk of the material are found at higher taxonomic levels. Family chapters precede selected species accounts that include excellent watercolors, distribution maps (new to this edition), common names in English, German, French, and Spanish, signigicance to humans, and conservation status..Excellent layout, stunning artwork, and unmatched coverage. Summing Up: Essential. Academic and public libraries."--Choice (September 2004)

"�Enjoyable reading� is not usually a phrase used in descriptions of encyclopedias, yet these four volumes of the second edition of Grzimek�s Animal Life Encyclopedia provide just that. Part of a 17-volume rewrite of the original 13-volume edition published beginning in 1967, these volumes exhibit excellence in writing, organization, illustration, and editing...These volumes are recommended for academic and larger public libraries." -- Booklist (December 2003)

"Most encyclopedias possess an inherent and consistent format�a fact that was questionable with earlier Grzimek encyclopedia works. Now published by Thomson Gale in affiliation with the American Zoo and Aquarium Association, this previous shortcoming is clearly no longer an issue...In the hands of Thomson Gale with the American Zoo and Aquarium Association, Grzimek�s Animal Life Encyclopedia becomes the standard in zoological encyclopedias. The content and scope of Mammals along with the format will provide depth and breadth to life science collections. Mammals is not only readable, but suitable for all school libraries supporting advanced science curricula, and for all public, college, and university libraries." -- ARBA (Annual 2004)

"This substantial reorganization now clearly separates the general descriptions of animal orders and families from the species accounts. Distribution maps have been vastly improved, and the text is accompanied by numerous color photographs, plates, and other graphics. Nearly 100 ornithologists, curators, professors, and zookeepers contributed to the bird volumes, and a brief bibliography has been appended to each section. Taxonomic controversies are carefully noted. Don't discard the earlier set, however; much of the anecdotal material in the original Grzimek set, deleted for space, remains valid and suppliements the revised text well." -- College & Research Library News (February 2003)