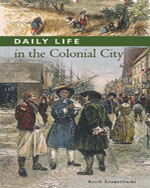 The American city was an integral part of the colonial experience. Although the five largest cities in colonial America--Philadelphia, New York, Boston, Charles Town, and Newport--held less than ten percent of the American popularion on the eve of the American Revolution, they were particularly significant for a people who resided mostly in rural areas, and wilderness. These cities and other urban hubs contained and preserved the European traditions, habits, customs, and institutions from which their residents had emerged. They were also centers of commerce, transportation, and communication; held seats of colonial government; and were conduits for the transfer of Old World cultures. With a focus on the five largest cities but also including life in smaller urban centers, Krawczynski's nuanced treatment will fill a significant gap on the reference shelves and serve as an essential source for students of American history, sociology, and culture.

In-depth, thematic chapters explore many aspects of urban life in colonial America, including working conditions for men, women, children, free blacks, and slaves as well as strikes and labor issues; the class hierarchy and its purpose in urban society; childbirth, courtship, family, and death; housing styles and urban diet; and the threat of disease and the growth of poverty.