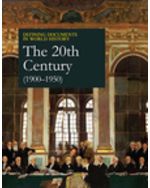 The first half of 20th century was marked by the death of Queen Victoria, the assassination of President McKinley, and publication of Sigmund Freud’s book on dream interpretation. By 1950, the technological advances of the 20th century were in full swing and several important social and political reforms were making their mark. This set offers in-depth analysis of a broad range of historical documents, including legal codes, letters, speeches, constitutions, reports, and books that impacted the world throughout the first five decades of the final century of the second millennium. Includes analyses of documents organized into major categories that include: Conflicts and Wars; Class and Society; and Exploration and Invention. The document chapters include the primary source document, often reproduced in its entirety, and the following sections: Summary Overview, Defining Moment, Author Biography, Document Analysis, and Essential Themes.