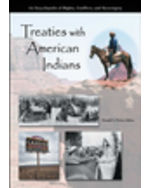 Treaties with American Indians: An Encyclopedia of Rights, Conflicts, and Sovereignty, 1st Edition

How are certain Indian tribes able to operate casinos in states that outlaw gambling? Hunt whales where international laws prohibit it? Profit from oil leases on federal land? Govern themselves as nations? All of these privileges are guaranteed by treaties, and, while the broken treaty remains a valid symbol for the treatment of Native Americans, many of the 370 pacts with the government were and are still honored.

Treaties with American Indians: An Encyclopedia of Rights, Conflicts, and Sovereignty is the first comprehensive introduction to the treaties that promised land, self-government, financial assistance, and cultural protections to many of the over 500 tribes of North America (including Alaska, Hawaii, and Canada). Going well beyond describing terms and conditions, it is the only reference to explore the historical, political, legal, and geographical contexts in which each treaty took shape.

Coverage ranges from the 1778 alliance with the Delaware tribe (the first such treaty) to the landmark Worcester v. Georgia case (1832), which affirmed tribal sovereignty to the 1871 legislation that ended the treaty process to the continuing impact of treaties in force today. Alphabetically organized entries cover key individuals, events, laws, court cases, and other topics. Also included are 16 in-depth essays on major issues (Indian and government views of treaty-making, contemporary rights to gaming and repatriation, etc.) plus six essays exploring Native American intertribal relationships region by region.