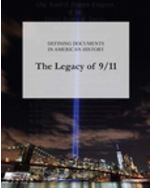 The tension between personal liberties and national security, always ready to erupt in the political fights played out in Washington, D.C., became a daily concern for all U.S. citizens in the wake of the attacks on September 11, 2001. Documents analyzed in this set include the Ladenese epistle (fatwa by Osama bin Laden against the U.S.); George W. Bush’s Speech about the Iraqi Threat; Mohamedou Ould Slahi’s diary from Guantanamo; The Patriot Act; Senate Resolution 118; Detainee Treatment Act (banning enhanced interrogation practices); Obama Announces the Death of Osama bin Laden; The Muslim Brotherhood: Evolution of an Islamist Movement; and Trump’s Travel Ban (including challenges and court rulings). Each primary source document, often reproduced in its entirety, includes sections that provide Summary Overview, the Defining Moment, Author Biography, Document Analysis, and Essential Themes.