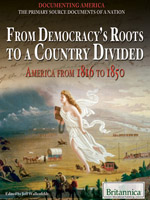 Documenting America: The Primary Source Documents of a Nation: From Democracy's Roots to a Country Divided, 1st Edition

Characterized largely by expansionism, economic growth, and social and political reform, the period in American history following the War of 1812 proved advantageous to a number of Americans. Even as many industries flourished, political unrest remained on the horizon as legislators debated the issue of slavery and the handling of newly acquired territories. Complete with eyewitness descriptions of key events and issues as well as seminal documents of the time, this absorbing volume recounts the historical, cultural, economic, and political developments of the United States in the decades leading up to the Civil War.