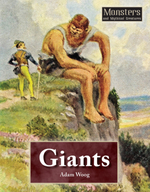 Giants have been part of folklore, religious stories, creation myths, and popular culture since the beginning of recorded history Â– and probably before then. Some are familiar figures from previous times, such as Goliath or the evil giant from Jack and the Beanstalk. Others are more recent Â– for example, Paul Bunyan or Harry PotterÂ’s friend Hagrid. In all cases, these unusual creatures have captured peopleÂ’s imaginations for thousands of years.