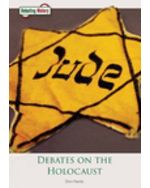 The mass systematic murder of more than six million of Europe’s Jews by the Third Reich, headed by Nazi dictator Adolf Hitler, during World War II shocked the world and remains an often examined and discussed example of attempted genocide. Through he narrative-driven pro/con format—supported by relevant facts, quotes, and anecdotes—this book examines controversial issues stemming from historic events. Topics include: Did Hitler Have a Master Plan to Eradicate Europe’s Jews? Was the Holocaust the Product of Endemic Anti-Semitism Among Germans? Did European Jews Offer Strong Enough Resistance to Nazi Assaults on Them? Could the Allies Have Stopped the Holocaust by Bombing Nazi Concentration Camps?

Front Cover.
Copyright Page.
Contents.
Foreword.
Important Events of the Holocaust.
1: A Brief History of the Holocaust.
2: Was Adolf Hitler the Primary Force Behind the Holocaust?.
3: Could Europe's Jews Have Put Up More Resistance to Nazi Aggression?.
4: Could the Allies Have Reduced the Severity of the Holocaust?.
5: Were the Nuremburg Trials Legally and Morally Justified?.
Source Notes.
For Further Research.
Index.
Picture Credits.
About the Author.