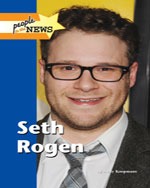 Contemporary biography series People in the News profiles the lives and careers of some of today's most prominent newsmakers. Whether covering contributions and achievements or notorious deeds, books in this series examine why these well-known people garner public attention. Through quotations from the individuals profiled as well as from friends, supporters, and critics, readers learn how these men and women view themselves as well as how others regard them. At twenty-nine years old, Canadian-born Rogen has an accomplished sixteen-year career that outpaces many twice his age, with more than thirty-five acting credits, four produced screenplays, more than a dozen short film and TV show scripts, and seven producing credits Rogen is anything but the slacker character he has played in his most popular, and often R-rated films. The author addresses the more controversial aspects of Rogen's movies and explains how the content and comedic style of these productions have sometimes put Rogen at the center of battles over censorship and ratings, as well as stirred controversy among critics, the media, and parental watch groups.