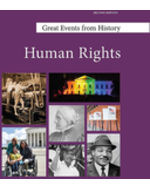 This updated reference work originally published in 1992 includes significant updates and a number of new articles that address human rights issues over the past 30 years. This 4-volume work traces the path of civil liberties and natural rights through history, from ancient codes to modern movements, through pivotal events that have directly affected people and their freedoms. It documents the progression, regression, and overall history of human rights through pivotal events. Modern milestones chronicled include: 2001: The U.S. Launches a War on Terror in Iraq and Afghanistan in Response to 9/11; 2004: The First Same-Sex Marriage is Performed in Massachusetts; 2006: The Global Internet Consortium is Founded; 2006: WikiLeaks Gives Whistleblowers a New Platform; 2014: ISIS Comes to Power in Iraq and Syria; 2015: China Revokes One-Child Policy; 2017: Gay Chechens are Purged; 2018: Peace Talks Begin on the Korean Peninsula; and 2018: Separating Immigrant Families at the Border.