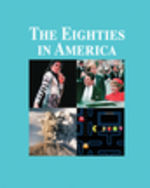 The Eighties in America, 1st Edition

This fully illustrated, three-volume encyclopedia is a companion set to The Sixties in America, The Fifties in America, and The Seventies in America. It covers events, movements, people, and trends in popular culture, literature, art, sports, science, technology, economics, and politics in both the United States and Canada.

The set's 663 articles discuss people, books, films, television series, musical groups, and other important topics representative of that era. Every entry focuses on the topic or person during the 1980's-for this work, defined as January 1, 1980, through December 31, 1989-in order to explore what made the decade unique.

Written with the needs of students and general readers in mind, The Eighties in America presents clear discussions of its topics, explaining terms and references that may be unfamiliar. Entries fall into the following general categories: arts and literature, business and economics, crime and punishment, disasters, education, environmental issues, film and television, health and medical issues, international relations, journalism, military and war, politics and government, popular culture, popular music, religion and spirituality, science and technology, sexuality, social issues, sports, and transportation.