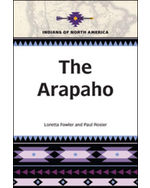 The Arapaho, part of the Indians of North America series, presents a fascinating portrayal of the history and culture of these native people. The Arapaho, like the Cheyenne, split into Northern and Southern divisions after moving from the Great Lakes region prior to the 18th century. Today the Southern Arapaho reside alongside the Cheyenne in Oklahoma, where they created a joint constitutional government and business committee; the Northern Arapaho live with the Eastern Shoshone on the Wind River Reservation in Wyoming.