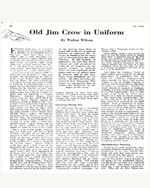 This new series contains a collection of essential materials for the study of the early development of the Civil Rights Movement—concerned with the issues of Lynching, Segregation, Race riots, and Employment discrimination. FDR assumed the presidency of a nation in which white supremacy was a significant cultural and political force. Many states denied or severely restricted voting rights to African Americans and used their political power to further diminish their status and to deny them the benefits and opportunities of society. There was constant pressure on FDR to support anti-lynching legislation. But civil rights were a stepchild of the New Deal. Bent on economic recovery and reform and having to work through powerful Southern congressmen, whose seniority placed them at the head of key congressional committees, the president hesitated to place civil rights on his agenda. FDR’s record on civil rights has been the subject of much controversy. This new collection from FDR’s Official File provides insight into his political style and presents an instructive example of how he balanced moral preference with political realities.