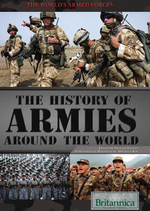 The History of Armies Around the World, 1st Edition

This high interest book delves into the compositions, command structures, and histories of the greatest armies in the world. Beginning with ancient armies from Egypt, Greece, and Assyria, this title takes readers on a tour through the development of armies in the Middle Ages, early modern history, and during the most notable conflicts of the 20th and 21st centuries. Special focus is given to prominent contemporary armies, and the structure and history of the U.S. Army, in particular.