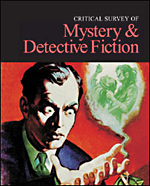 Continuing the Salem Press tradition of Critical Survey series, Critical Survey of Mystery and Detective Fiction, Revised Edition provides detailed analyses of the lives and writings of major contributors to the fascinating literary subgenre of mystery and detective fiction. This greatly expanded five-volume set is the first full revision of a work that originally appeared in 1988.