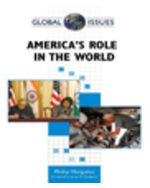 It seems hard to believe that just over 200 years ago the United States was little more than an extension of the British Empire. Yet the colonies managed to gain independence, develop a new government, and eventually turn their attention to western expansion and foreign affairs. As the country cycled through phases of isolationism and foreign activism in the 20th century, America became increasingly interested in shaping its place in the world. Emerging as one of two superpowers after two devastating world wars, the United States felt responsible for promoting the spread of democracy and freeing nations from oppression and tyranny. Nearly two decades after the collapse of the Soviet Union, there is little agreement about America's role in the world - what it really is and what it ought to be.

When, where, and why should the United States use military force? How should America respond to globalization? Do the institutions created by the United States after World War II - such as the United Nations, the International Monetary Fund, and the World Bank - still work, and if not, what can be done to fix them? America's Role in the World examines these questions and more, beginning with a detailed history of American foreign policy and America's debate over the direction its foreign policy should take in the future. This well-written and balanced volume examines America's role in the world from the perspective of Europe, Latin America, the Islamic World, Asia, and Russia, and will make a strong addition to classrooms and for student debate.