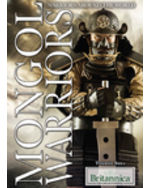 Much myth has been made in subsequent centuries over the nomadic Mongols, who, under the unified leadership of the khan, established a massive empire spanning the Asian continent in the 13th century. This title follows the life of Genghis Khan, from humble beginnings through his rise to power and, ultimately, the transfer of his authority to mighty successors such as Kublai Khan. The reader will glean key points of interest, from the Golden Horde in modern-day Russia to the Yuan Dynasty in China, alongside the average life of the warrior and nomad on the steppes of Central Asia.