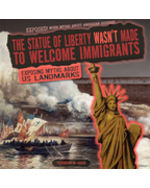 Exposed! More Myths About American History: The Statue of Liberty Wasn't Made to Welcome Immigrants: Exposing Myths About US Landmarks, 1st Edition

American landmarks sometimes evoke more than their original intent. For example, the Statue of Liberty was a gift symbolizing the friendship between France and the United States, but it became a welcoming monument to millions of immigrants heading to Ellis Island. This beautifully designed book offers numerous intriguing facts about American landmarks, including the Washington Monument, Statue of Liberty, and more. Each site's history unfolds through the dismantling of a myth about it. Readers will become savvy tour guides of our nation's most treasured locations.